On Monday, India reported 366,161 new cases, its health ministry said — the first time daily infections have dipped below 400,000 since May 6. Its total caseload is now more than 22 million since the pandemic began.
The health ministry also reported an additional 3,754 virus-related deaths on Monday, after two consecutive days of reporting more than 4,000 fatalities. The country has now recorded 246,116 total Covid-19 deaths — among the highest in the world — with the Institute for Health Metrics and Evaluation at the University of Washington estimating that by August, India may have reached 1 million deaths.
The spiraling crisis is stretching India’s health care system beyond breaking point. Beds, oxygen and medical workers are in short supply. Some Covid patients are dying in waiting rooms or outside overwhelmed clinics, before they have even been seen by a doctor.

While about half of India’s states and union territories have implemented their own shutdowns to deal with the second wave, there are intensifying demands for India to impose a second national lockdown. 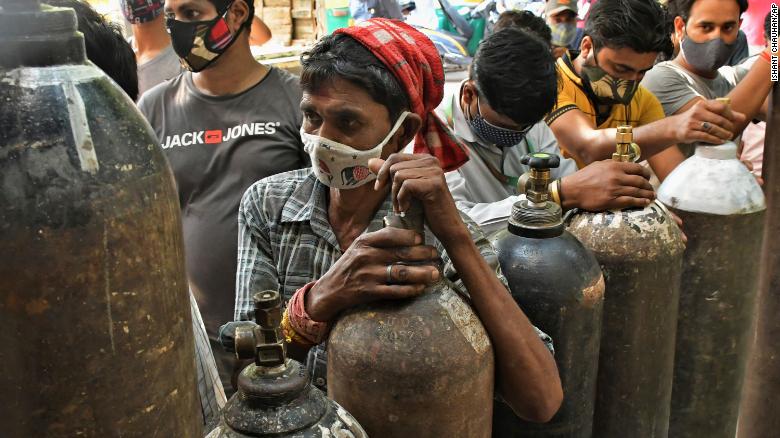 Indians wait to refill oxygen cylinders for Covid-19 patients at a gas supplier facility in New Delhi on May 8.

On Sunday, Dr. Anthony Fauci, the director of the US National Institute of Allergy and Infectious Diseases and top White House coronavirus adviser, said he believed India should lock down.

“You’ve got to shut down. I believe several of the Indian states have already done that, but you need to break the chain of transmission, and one of the ways to do that is to shut down,” Fauci said on ABC’s “This Week.”
In a separate interview with CNN affiliate CNN News18 on Friday, Fauci added such a lockdown was needed to “get ahead of the trajectory of the outbreak.”
“I don’t mean shutting down for six months,” he said. “You just need to break the chain of transmission. And one can do that by shutting down to the extent possible for two, three weeks, four weeks. And then, as soon as the cases start coming down and you vaccinate more people, then you can get ahead of the trajectory of the outbreak.”
On Saturday, The Indian Medical Association (IMA) said it had been calling for a “complete, well-planned, pre-announced national lockdown” for the past 20 days. The lockdown, it said, needed to last about 10 to 15 days in order to give the country’s overstretched health system time to “recoup and replenish both the material and manpower.”The IMA said “sporadic night curfews” and other restrictions imposed by several states “have not done any good.”
India imposed one of the world’s largest and harshest lockdowns in March last year, when the country of 1.36 billion people had reported little more than 500 coronavirus cases and 10 related deaths.
The nationwide measure was announced with less than four hours’ notice and little planning, triggering a migrant crisis. It also brought the country’s economic activity to a virtual standstill, with businesses, factories and construction sites ground to a halt.
Modi previously warned lockdowns should only be considered as a last resort. “In today’s situation, we have to save the country from lockdown. I would request states to use a lockdown as their last option. We have to try hard to avoid lockdowns and focus only on micro containment zones,” he said in late April.
It has been left up to the states to decide when and how to implement these zones.

In an interview with Agence France-Presse (AFP) Saturday, the World Health Organization’s chief scientist said the Covid-19 variant spreading in India, known as B 1.617, is more contagious and is contributing to the crisis there.
Soumya Swaminathan warned “the epidemiological features that we see in India today do indicate that it’s an extremely rapidly spreading variant.” She also said large gatherings, social mixing, the relaxation of mask-wearing and other protection measures were also to blame.
The variant, first identified in India in October, is listed by WHO as a “variant of interest” — but Swaminathan said it could soon be labeled a “variant of concern,” which indicates it is more dangerous than the original strain.
“B 1.617 is likely to be a variant of concern because it has some mutations which increase transmission, and which also potentially could make (it) resistant to antibodies that are generated by vaccination or by natural infection,” she said.
The Indian government has been blasted for ignoring warnings of a second wave, encouraging complacency, and failing to be transparent on Covid-19 data, in a scathing editorial in the medical journal The Lancet.
The publication branded the response by Modi’s government “inexcusable” and said India “squandered its early successes” in controlling Covid-19. Despite warning about “the risks of superspreader events,” religious festivals and political rallies were allowed to go ahead.

As infections increase, at least 19 of India’s 36 states and union territories are under full Covid-19 lockdowns and at least 24 under some of form of restrictions, according to CNN data compiled from state governments.
And several regional authorities have announced in the past week fresh restrictions with some extending or tightening previously set guidelines.
Last weekend, the western state of Gujarat and the northern states of Uttar Pradesh — India’s most populous — and Uttarakhand imposed or extended lockdowns.
In a statement, the Uttar Pradesh government announced an extension for another seven days until May 17, with only essential services allowed to function. “Only medical related work, vaccinations, commercial activities which are providing essential services will be allowed,” the statement read.
A total of 36 cities in Gujarat will see their lockdowns extended until May 12, according to the state government.
In Uttarakhand, which begins a week-long lockdown on May 11, infections have been rising since April when the Kumbh Mela — a Hindu festival where millions of pilgrims from across the country traditionally gather along the banks of sacred rivers to offer their prayers — took place. 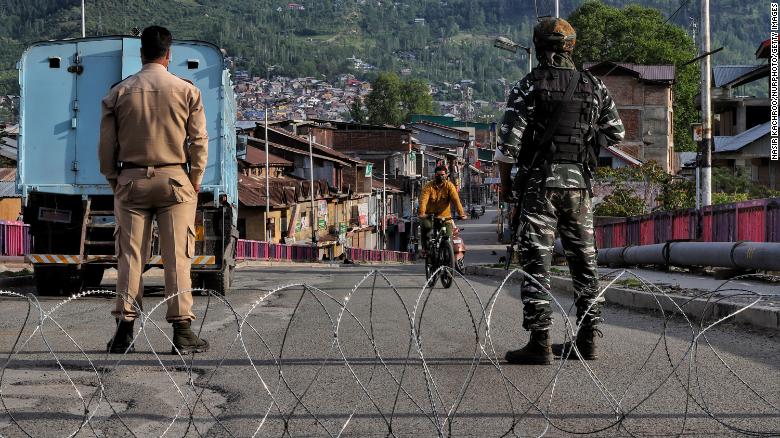 Central Reserve Police Force at a temporary check point during Covid-19 Corona Curfew in Baramulla, Jammu and Kashmir, on May 9.

On Sunday, the union territory of Delhi, which encompasses the capital New Delhi, announced it was extending its lockdown for the third time until May 17.
Delhi Chief Minister Arvind Kejriwal said the latest lockdown will be “stricter,” with non-essential shops and services mandated to remain closed, and local metro train services suspended.
Meanwhile, India’s northernmost union territory of Jammu and Kashmir imposed a “corona curfew” until May 17 across all of its districts, the Department of Information and Public Relations said Saturday.

India’s neighbors on the verge of a Covid catastrophe

As India’s coronavirus crisis worsens, new waves of infections are fast engulfing a growing number of nations across South and Southeast Asia.
In Nepal, hospitals are closing their doors to new patients as they struggle through a dire oxygen shortage.
The Om Hospital and Research Center in Kathmandu said Sunday it was unable to admit new patients amid a “crisis of oxygen.” It is one of six private hospitals in Nepal’s capital Kathmandu to stop admitting Covid patients due to lack of oxygen supplies.
Nepal recorded 8,850 new Covid-19 cases on Sunday, bringing the country’s recorded total to 394,667, according to the latest figures from the Ministry of Health. The Kathmandu Valley alone recorded 4,198 new cases in the past 24 hours. 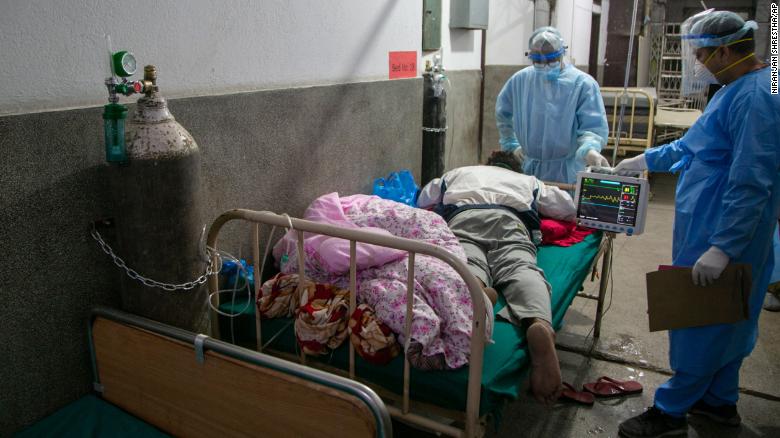 Nepali doctors treat a Covid-19 patient on the corridor of the emergency ward of a hospital in Kathmandu, Nepal on May 5.

International rights group Human Rights Watch called on Nepal’s government Sunday to “urgently act” to manage the rapidly escalating Covid-19 emergency there.
“Nepal’s under-resourced public health system is strained beyond capacity,” said Meenakshi Ganguly, South Asia director at Human Rights Watch. “Large volumes of oxygen equipment and other medical supplies are urgently needed to avert a Covid-19 catastrophe in the country.”
In Pakistan, the country’s top Covid official warned the danger of the virus spreading in the country was “higher than ever.”
In a tweet Saturday, Asad Umar, the chief of Pakistan’s National Command and Control Center (NCOC), said there was a “need for caution” and the country must “unite” against the danger of another wave.
Pakistan has imposed a lockdown in the lead up to the public holiday of Eid-al-Fitr marking the end of the Muslim holy month of Ramadan. According to the country’s health ministry, there are 82,731 active cases of the virus in the country with 120 deaths recorded in the past 24 hours.
Correction: An earlier version of this story misstated the number of Indian states and union territories implementing Covid-19 lockdowns. At least 24 are under some form of restrictions, with 19 under lockdowns.