Asia’s third largest economy has been struggling for weeks to control the devastating surge. Hundreds of thousands of new cases are reported every day, and economists are rethinking their forecasts for double-digit growth this year — a troubling sign for a country that plunged into recession last year for the first time in nearly a quarter of a century after the government imposed a nationwide lockdown.

Prime Minister Narendra Modi has so far resisted calls to impose another total lockdown on the country, even as many regions have announced their own heavy restrictions. But several global industries that rely on India are looking on anxiously. Should the crisis deepen, everything from clothing and pharmaceuticals to financial services and global shipping could feel the pain.

About 80% of world goods trade by volume is carried on ships, according to the United Nations World Conference on Trade and Development, and India provides many of their crews.

More than 200,000 of an estimated 1.7 million seafarers globally are from India, according to Guy Platten, the Secretary General at the International Chamber of Shipping. Many of them have officer ranks and roles requiring important skills, he added.
“We hope to goodness” this situation can be resolved, Platten told CNN Business. Otherwise it could lead to big “shortage of seafarers,” which would “disrupt the global supply chain,” he added.
As many countries have banned flights from India, it is already impossible to move Indian workers to ports around the world, and swap crews.
René Piil Pedersen, head of Marine Relations at Maersk, the world’s largest container shipping company, hopes that countries start distinguishing between regular travelers and seafarers. Otherwise, he said, the world could face both a serious threat to global cargo flows, and a “humanitarian crisis,” because crews would not be able to leave their vessels and return home.
“It will take a heavy toll on their mental welfare,” said Pedersen, whose company employs 30% of its seafarers from India.
The pandemic threw global shipping into chaos last year, with nearly 200,000 seafarers stranded for months due to port closures and grounded airplanes. Some workers had started calling their vessels “floating prisons” — and Pedersen fears a return to that scenario if India’s Covid-19 crisis continues unabated.
There are also significant delays in the movements of vessels.
Some places, such as the United Arab Emirates, Singapore, Hong Kong and mainland China, “have already imposed strict quarantine restrictions for vessels arriving from Indian ports,” said Sankar Narayanan, manager for shipping at shipping and logistics company GAC India.
Experts say vaccinating seafarers could be a solution, but that may prove to be hard to execute.

Vaccines and other pharmaceuticals

The world’s vaccination drive is already suffering because of the outbreak in India, which typically produces more than 60% of all vaccines sold globally. The country is home to the Serum Institute of India (SII), the world’s largest vaccine maker. Its vast manufacturing capability is why the country signed on as a major player in COVAX, the global initiative that provides discounted or free doses of the Covid-19 vaccine for lower-income countries.
SII agreed last year to manufacture up to 200 million Covid vaccine doses for up to 92 countries. But, with only 2% of India’s population fully vaccinated, the government and SII have shifted focus from supplying vaccines to other countries, and are now prioritizing Indian citizens.
The bad news doesn’t end there. Apart from the Covid vaccine shortage, there could be other consequences for the worldwide pharmaceutical industry if the spread of the infection in India is not controlled soon.
India is the world’s largest supplier of generic drugs — copies of brand-name pharmaceuticals that have the same effects but cost less. In the United States, 90% of all prescriptions are filled by generic drugs and one in every three pills consumed is produced by an Indian generics manufacturer, according to an April 2020 study by the Confederation of Indian Industry and KPMG.
But Indian drug makers get as much as 70% of their raw materials from China, a link in the supply chain that looks vulnerable given the coronavirus surge. At the end of April, China’s Sichuan Airlines suspended cargo flights to India for 15 days. That prompted India’s top pharmaceutical export group to write to India’s ambassador in Beijing, urging him to intervene.
In the letter, Ravi Udaya Bhaskar, director general of the Pharmaceutical Export Promotion Council of India, termed the suspension “worrisome” — and said it could have a “cascading effect” on the supply chain.
“Most countries depend on India for generic drugs, and India depends on China for raw material. It will be a big blow to [the] global pharma supply chain if trade between the two is disrupted,” said Tinglong Dai, associate professor of Operations Management and Business Analytics at the Johns Hopkins Carey Business School.
For now, the impact seems limited. Bhaskar told CNN Business last week that there is currently no shortage of drugs, since big firms have enough raw material to tide them over the next three to four months. He also said that Sichuan Airlines was likely to resume service this week.
Sichuan Airlines did not respond to a request for comment. 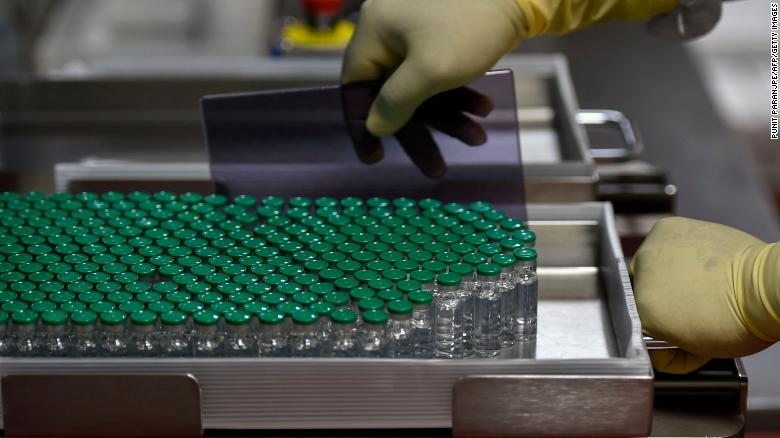 Vials of Covishield, AstraZeneca-Oxford’s Covid-19 coronavirus vaccine are pictured inside a lab where they are being manufactured at India’s Serum Institute in Pune on January 22, 2021.

India is one of the largest textile exporters in the world, and the industry is struggling with severe labor shortages.
“This is the first time our generation has experienced something like this. No one was prepared for this dreadful scenario,” said Arpit Aryan Gupta, partner and new business development head at apparel manufacturer NG Apparels, which is in Ludhiana, Punjab, a big garment producing hub. The company, which supplies brands including New Balance and Nordstrom, employs about 100 skilled and semi-skilled workers, and nearly 50% of them have left since the latest Covid-19 surge began. Gupta said he is providing housing for remaining workers on site to keep the factory running.
Elsewhere, manufacturers are staring at equally worrisome scenarios.
In the major garment production hubs of Delhi and Bangalore — which are also states with a high number of Covid-19 infections — absenteeism among workers is as high as 50%, according to consulting firm Wazir Advisors. And for many manufacturers who are still recovering from last year’s slowdown, the safety of workers has become a huge concern.
Domestic clothing industry consumption and exports last year fell by 30% and 24%, respectively, according to Wazir Advisors.
“But for 2021, it is difficult to project right now as we are not sure by when this pandemic will end,” the firm added.
India is also a major global exporter of leather and leather goods. The country is the second-largest exporter of leather garments and the fourth-largest exporter of leather goods in the world, according to the Indian Council for Leather Exports. It is also a major producer of footwear, after China, producing nearly three billion pairs of shoes annually.
Last year, the pandemic dealt a serious blow to India’s leather industry, and businesses had just begun to recover before the latest wave led to massive shutdowns and a shortage of skilled staff. 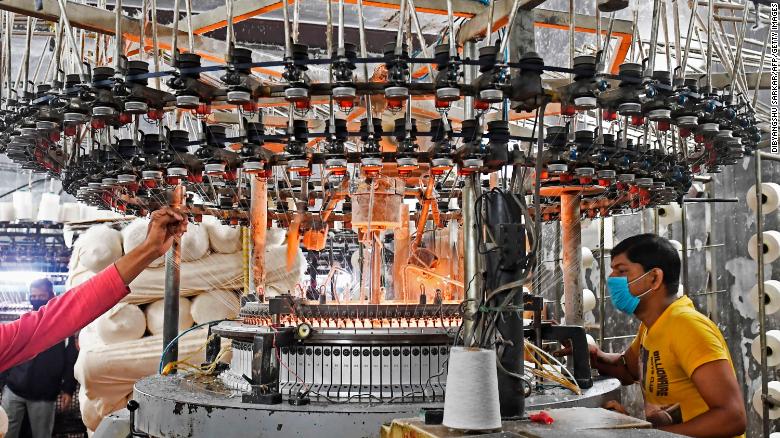 Labourers work in a Hosiery mill in Kolkata on February 1, 2021.

Big banks and accounting firms are scrambling to keep their online operations afloat, given how important India is as a hub for their back offices.
Many companies have outsourced a huge number of information technology and operations jobs to India in recent decades, attracted by an educated workforce and cheaper labor costs. Almost 4.4 million people in the country are employed in IT and business process management, according to the National Association of Software and Service Companies, a trade body.
Some companies are taking some measures to address the crisis, include shifting work to other countries, encouraging staff to work from home and extending project deadlines.
Goldman Sachs (GS) and Wells Fargo (WFC), for example, have implemented remote work for all employees. But working from home during a pandemic is complicated, especially if employees have to look after sick relatives. There are also challenges around security and data protection, since employees may be handling sensitive company or customer information.
UK banks Barclays (BCLYF), NatWest and Standard Chartered (SCBFF) are in some cases redirecting work to other countries to relieve pressure on employees in India, many of whom have fallen ill or have care responsibilities at home.
EY India, which has over 56,000 workers, activated a business continuity plan at the start of the surge, which included shifting work to other geographies. Almost all of its employees are working from home, according to Julie Teigland, a regional managing partner.
“A significant number of EY people and their family members have been directly impacted by the severe second wave of Covid in India,” she told CNN Business.
— Parija Kavilanz and Hanna Ziady contributed to this report.