The world’s biggest vaccine maker is stalling on exports. That’s a problem for the planet’s most vulnerable – Vihelm
Ir para o conteúdo

CNN: The world's biggest vaccine maker is stalling on exports. That's a problem for the planet's most vulnerable

(CNN)When Uddhab Gautam got his first vaccine dose back in February, Covid-19 cases in Nepal were low.

Now, three months later, coronavirus infections in the Himalayan nation have spiraled out of control, leading to a shortage of hospital beds and oxygen, and sending most of the country into lockdown.
But despite needing it more than ever, the 67-year-old retired banker has no idea when he’ll get his second dose of Covishield, the AstraZeneca vaccine manufactured by the Serum Institute of India (SII).
“As an older person, I’m afraid of contracting the virus,” he said from his home in Nepal’s capital Kathmandu. “I have chosen to stay indoors.”
Gautam’s predicament is similar to one shared by millions worldwide: as India’s own coronavirus crisis has spiraled, SII — world’s largest vaccine maker — can no longer export its goods. 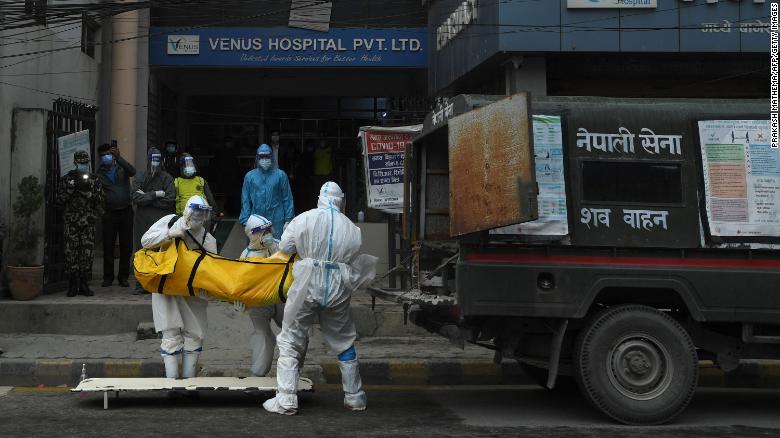 Nepal army personnel wearing personal protective equipment (PPE) load the body of a person who died from Covid-19 coronavirus before taking it to a crematorium in Kathmandu on May 5, 2021.
Last week, the SII said it wouldn’t restart deliveries to COVAX, a worldwide initiative aimed at distributing vaccines to countries regardless of wealth, until the end of this year.
While SII’s decision will be a lifeline for India, which is still reporting about 200,000 new cases a day, the delay poses a huge problem for developing countries that depend on COVAX to control large outbreaks of their own.
The world is already 140 million doses short — and by the end of June, that gap will have reached 190 million shots, the United Nations children’s agency, one of the partners in COVAX, said last week. There is currently no timeframe for resolving the shortage, UNICEF said.
That creates a very real problem, not just for countries with limited access to vaccines where cases are exploding, but also for the whole world.
“We are concerned that the deadly spike in India is a precursor to what will happen if those warnings remain unheeded,” UNICEF executive director Henrietta Fore said in a news release last week. “The cost for children and families will be incalculable.”

Why there are COVAX shortfalls

Last year, the SII — which manufactures Covishield, the name given to the AstraZeneca vaccine manufactured in India — promised to deliver 200 million vaccines to COVAX.
More than 111 million of those doses were set to be delivered between February and May this year, mainly to countries in Africa and Asia-Pacific, according to data from Gavi, a public-private global health partnership that is co-leading COVAX.
But as of Tuesday, only about 30 million SII doses had been distributed via COVAX, according to Gavi.
According to UNICEF, SII’s delivery delays are a major reason why the COVAX rollout is so behind schedule, along with vaccine nationalism, limited production capacity and a lack of funding. COVAX should have already delivered 170 million total doses, UNICEF said. Instead, as of Tuesday, it has delivered 71 million shots to 125 countries and territories, with about 42% coming from SII, and 56% from AstraZeneca, according to Gavi data.
SII began distributing vaccines overseas at the start of the year when India’s cases had fallen, and other countries were in “desperate need of help,” the company’s CEO Adar Poonawalla explained in a statement last week.
But as India’s cases rose, SII kept supplies at home where there was a growing need. The government denied media reports it had banned vaccine exports.
The World Health Organization (WHO) warned in March that SII doses would be delayed. By that point it had delivered just 28 million shots.
As India’s caseload started spiking, demand for vaccination grew, and a number of states reported a shortage of shots. That prompted questions about why India — the world leader in vaccine manufacturing — was running out of doses. As of Tuesday, just 3% of India’s population had been fully vaccinated. SII said last week it had delivered more than 200 million doses in total.
“We continue to scale up manufacturing and prioritize India. We also hope to start delivering to COVAX and other countries by end of this year,” Poonwalla said.
Poonwalla said SII had never exported vaccines “at the cost of the people in India” and would “remain committed to do everything we can in support of the vaccination drive in the country.” “We have been working with the government tirelessly to do our best for humanity and will continue in the same spirit,” he said.
A Gavi spokesperson said in a statement that it was in close contact with both SII and the Indian government, and hoped deliveries could resume in a reduced capacity in the third quarter of this year.

What this means for developing countries

Across the border in Nepal, where coronavirus cases and deaths are soaring, SII’s announcement has left authorities scrambling.
Nepal has only fully vaccinated 1.9% of its population and has almost run out of vaccines.
The country has reported more than 500,000 Covid-19 cases and 6,700 deaths. But Nepal has the third highest test positivity rate in the world — about 40% of tests come back positive — suggesting it is not catching all cases.
The spokesperson for the Ministry of Health and Population, Dr. Jageshwor Gautam, said last week the country only has about 50,000 to 60,000 doses of SII’s Covishield in storage for “emergency purposes.” Nepal’s Health Minister Hridayesh Tripathi said last week that authorities planned to use them in a few days to give elderly people their second dose. 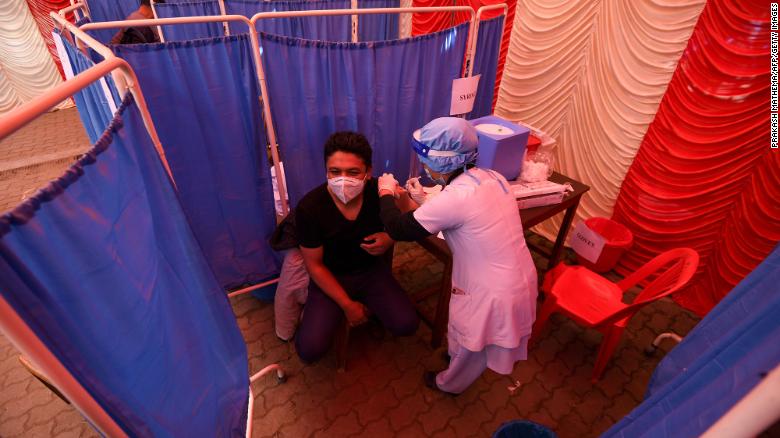 A health worker receives a dose of Covishield, AstraZeneca-Oxford’s Covid-19 coronavirus vaccine made by Serum Institute of India, at Patan Hospital near Kathmandu on January 27, 2021.
The country was hoping to receive 1 million more vaccines by the end of April, but they never arrived. In total, Nepal only received 348,000 doses of its allocated 1.9 million doses of AstraZeneca vaccine through COVAX. According to Tripathi, COVAX initially promised 14.8 million doses — enough for about a quarter of the country’s population.
Millions of Nepalis have received no dose at all, and 1.5 million people — most of them 65 or older — have received one dose of the vaccine, but haven’t yet received their second, prompting concerns about how long their immunity will last.
“I haven’t heard anything since the first dose,” said Durga Kaumari Paudel, 66, a housewife who lives with her husband and son in Kathmandu. One of her neighbors died this month from Covid-19, which only adds to her concern — she has been so afraid she hasn’t stepped outside her house in a month.
It’s unclear whether delaying the timing of second dose will decrease efficacy, but trials show two doses of a vaccine is likely to be better than one, according to Gavi.
Health Minister Tripathi said Nepal is in talks with a number of countries in a bid to get the vaccines it needs. He said he’s talked to officials from the United States, the United Kingdom and other countries about the AstraZeneca vaccine, and sent letters to the health ministers of the US, UK, China and Russia Wednesday updating them about Nepal’s needs.
“We’ll get the vaccines we need soon. We are quite confident,” he said.
Nepal isn’t alone. Bangladesh was set to receive more than 10 million Covishield doses by the end of May, according to Gavi’s allocations. But it’s unclear if those ever arrived — and Bangladesh has now run out of vaccines, according to the International Federation of Red Cross and Red Crescent Societies (IFRC).
The country has fully vaccinated just 2.4% of its 164 million population, and cases appear to be rising again. After a request from Bangladesh, China gifted another 600,000 vaccine doses, the Chinese Embassy in Dhaka said in a statement Friday.
Papua New Guinea, Sri Lanka and Cambodia were also expecting Covishield deliveries, and are all now experiencing spikes in cases. According to IFRC, a “majority” of countries in Asia were struggling with vaccine shortages.
“Asia is now the epicenter of this global pandemic,” said Alexander Matheou, IRFC’s Asia-Pacific director. “Tens of thousands of lives are being lost each week and vaccines must be available so that we can prevent further terrible tolls in the weeks and months ahead.”

What this means for the world

A hamstrung COVAX isn’t just a problem for countries in Asia — it has potentially worldwide ramifications.
“We have issued repeated warnings of the risks of letting down our guard and leaving low- and middle-income countries without equitable access to vaccines, diagnostics and therapeutics,” UNICEF’s Fore said in a statement. “The longer the virus continues to spread unchecked, the higher the risk of more deadly or contagious variants emerging.”
This month, COVAX-co leader Coalition for Epidemic Preparedness Innovations (CEPI) set up a COVAX manufacturing task force to tackle vaccine supply challenges, such as a shortage of raw materials.
The Gavi spokesperson said one of its top priorities currently was to work with governments with the largest supplies to deliver vaccines through Covax to countries where they could have “an immediate impact in addressing this short-term supply disruption.” They did not specify which countries this included.
But, as Fore points out, SII isn’t the only group that can help solve the vaccine shortage.
Only WHO-approved vaccines can be rolled out via COVAX. Earlier this month, WHO listed China’s Sinopharm for emergency use, making it the sixth vaccine to be given the green light to be used as part of COVAX.
Gavi said earlier this month it was in talks with manufacturers, including Sinopharm, to get more COVAX doses, Reuters reported.
While some countries are desperate for vaccines, others are inoculating the less vulnerable, such as young people, a situation that Tedros Adhanom Ghebreyesus, WHO director-general, described last week as “vaccine apartheid.” In his opening remarks at the World Health Assembly Monday, he noted that more than 75% of all vaccines have been administered in just 10 countries.
“The ongoing vaccine crisis is a scandalous inequity that is perpetuating the pandemic,” he said. “The number of doses administered globally so far would have been enough to cover all health workers and older people, if they had been distributed equitably. We could have been in a much better situation.”
UNICEF said in an email that it was urging countries with excess doses to share them as an immediate stop-gap measure. IFRC is also calling for states and pharmaceutical companies to move faster in distributing vaccines.
“We cannot afford to become bogged down in negotiations over the next six months,” IFRC president Francesco Rocca said, adding that government needed to share stocks, particularly with countries experiencing Covid-19 surges.
Tedros called on manufacturers to give COVAX the first right of refusal on new vaccines, or commit 50% of vaccines to COVAX this year.
“There is no diplomatic way to say it,” he added. “A small group of countries that make and buy the majority of the world’s vaccines control the fate of the rest of the world.”